The CAL-ABOTA Board of Directors includes officers of the eight local chapters. Each CAL-ABOTA chapter is entitled to nominate a candidate for Trial Lawyer of the Year. Written and oral presentations are submitted to CAL-ABOTA's board followed by the selection of the award recipient by majority vote.
General Criteria For Selection Of California Trial Lawyer Of The Year 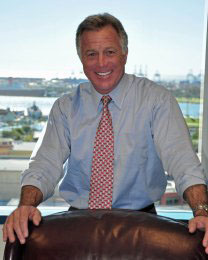 Richard Carroll attended Dartmouth College and received a B.A. in 1976. He graduated from Pepperdine Law School in 1984. Richard is one of the founding members of Carroll, Kelly, Trotter, Franzen, McBride & Peabody. After a short career trying criminal cases, Mr. Carroll undertook professional malpractice defense in 1986 and helped form Carroll Kelly Trotter Franzen & McKenna in 1994. He has zealously represented the defense of a variety of professions for 30 years.

Richard has tried and arbitrated disputes as lead counsel in over 200 cases. Richard is a Diplomate with the American Board of Trial Advocates and has served on the Executive Board of ABOTA in Los Angeles for over 10 years. He was also pleased to serve as the ABOTA Los Angeles Chapter President in 2006.

Richard has also been inducted in the American College of Trial Lawyers. The American College of Trial Lawyers is composed of the best of the trial bar from the United States and Canada and is widely considered to be the premier professional trial organization in America. These organizations are by invitation only and are comprised of the most experienced trial attorneys in the country.

In addition: Richard has also spoken throughout the United States on various topics involving trial skills and defense strategies in professional malpractice claims. He has participated in numerous “Masters in Trial” presentations both in California and Nevada. He has also lectured to the Annual California Judges School.

In 2015, Richard was honored as a Champion of Justice by Loyola Law School as a lawyer who embodies the spirit of the civil justice system through his exceptional legal career. He is a recipient of the Lee Wenzel Civility Award for excellence in trial and possessing the highest moral character. Richard has achieved the AV Preeminent rating from Martindale-Hubbell – the highest possible rank. Richard has also been selected as a California Super Lawyers, part of Thomson Reuters from 2005 to the present.

Past Cal-ABOTA Trial Lawyers Of The Year